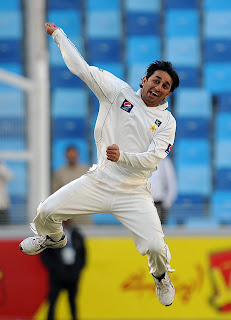 Mohammad Hafeez - 8 - a solid knock of 88 in Pakistan's first innings to set the foundations of their substantial lead over England, and a bonus point for the early wicket of Cook in England's first innings.
Taufeeq Umar - 7 - played a valuable supporting role to Hafeez in getting Pakistan's first innings off to the ideal start as he made 58.
Azhar Ali - 2 - out for 1 in Pakistan's first innings, playing at one he shouldn't have. The problems he had in England back in 2010 still appear to be embedded.
Younis Khan - 6 - fielded well and made a solid 37 to steady the Pakistan ship after the loss of Ali.
Misbah-ul-Haq - 8 - captaincy was excellent throughout, particularly his bowling changes which were timed perfectly, and made a typically gritty if unspectacular 52 to guide Pakistan towards a first innings lead.
Asad Shafiq - 3 - poor dismissal in Pakistan's first innings. Looks to have technique issues.
Adnan Akmal - 9 - six catches in the match to go with his impressive 61 in Pakistan's first innings, despite a shaky start. Farmed the strike very well as he batted with the tail.
Abdur Rehman - 7 - bowled well despite not taking many wickets. Exercised a good deal of control.
Umar Gul - 7 - took 4 wickets in England's second innings, which gets him a couple of bonus points, but overall didn't look particularly threatening.
Saeed Ajmal - 10 - a point for each wicket for the stand out performer, taking 7 wickets in England's first innings, and constantly bamboozling the England batsmen in the flight, despite very little turn being on offer. England need to develop a strategy for playing Ajmal if they are to turn this series around.
Aizaz Cheema - 6 - was quite unlucky not to take more wickets, with his new ball spell at Cook in England's second innings being particularly testing. Hampered by an apparent hamstring injury.

Andrew Strauss - 6 - captained well when England were in the field, and was desperately unlucky to be given out in England's second innings. His worrying run of form continues, however, but talk of him being under pressure is incredibly premature.
Alastair Cook - 1 - no runs in either innings on a pitch that should have suited his batting style perfectly. Needs a big improvement after a run of five scores of five or less in his last seven innings.
Jonathan Trott - 7 - the one England batsman along with Prior's first innings knock that looked at home in the conditions and against the Pakistan spinners. His team mates would do well to take note, despite his two disappointing strokes to get himself out. Finally became the 'partnership breaker' he is so often referred to as when he took the key wicket of Younis Khan in his first over.
Kevin Pietersen - 1 - two failures. Worked hard in the first innings for his 23 ball 2 before being trapped lbw, and played a rash shot when on nought in the second innings. Could the empty stadium have subdued this player that so often performs on adrenaline?
Ian Bell - 1 - two failures also, his dismissal to Ajmal in the first innings was the only real case of the bowler getting the batsman out, but his failure to pick the doosra is a worry and needs rapidly correcting if he isn't to become Ajmal's 'bunny'.
Eoin Morgan - 3 - fielded well and looked in decent touch with the bat, but got out relatively cheaply both times. Looked to be one of the better players of spin in the England lineup, despite falling to it in both innings.
Matt Prior - 7 - England's stand out batsman in the first innings, batting with unusual caution before being left high and dry on 70 not out. Kept well, his catch to dismiss Shafiq being the highlight, but fell cheaply in the second innings.
Stuart Broad - 7 - the pick of England's bowlers, Broad bowled very well on a batsmans pitch (though England's batting effors wouldn't have you believe that) and had a go with the bat.
Graeme Swann - 7 - took 4 wickets in the Pakistan innings despite not being as economical as he would have liked, and gets a bonus point for two very decent knocks with the bat.
Chris Tremlett - 5 - economical with the ball but largely unthreatening. Not really his type of pitch and may be replaced by Steven Finn for the second Test.
James Anderson - 7 - was economical and dangerous with the ball at times. Possibly unlucky not to have taken more wickets and played a key role alongside Broad in restricting Pakistan's run rate. Scored more runs with the bat than Cook, Pietersen and Bell combined.
Posted by Andy Bloxham at 10:12