The curious case of Jacques Kallis...

Twenty years on since the re-admission of South Africa to world cricket following their exclusion due to the government's policy of apartheid, the once banished nation is standing tall alongside the other behemoths of the sport.
They've never been short of talented crickets, South Africa. Prior to the sporting boycott of the nation in 1970 they were represented by undoubted greats of the game in the form of Graeme Pollock and Eddie Barlow, to name but two, and since their re-admission have seen numerous world class performers don the olive green cap. 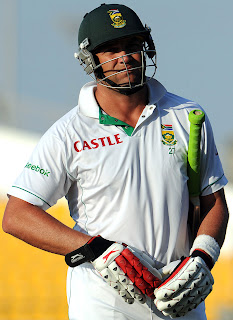 Open to debate this may be, but perhaps South Africa's greatest ever performer, and a man that has been a stalwart of the side since re-admission is Jacques Henry Kallis. Kallis, it could be argued, is right up there alongside Sir Garfield Sobers as the greatest all-rounder the sport of cricket has ever seen, boasting an incredible 40 Test centuries, second only to Sachin Tendulkar, at an average of 57.43 (at the time of writing).
Add to this 270 Test wickets at an average of 32.01, in addition to the fact that Kallis is the only man to have scored in excess of 10,000 runs and taken in excess of 250 wickets in Test cricket, and you've got yourself one heck of a cricketer.

Why, then, does debate amongst cricket supporters often see Jacques Kallis being ranked slightly below the likes of Sachin Tendulkar, Ricky Ponting, Brian Lara and Rahul Dravid when discussing the greatest batsmen of his era. Purely in terms of statistics, and despite his all-round credentials, Kallis has a batting average superior to any of the aforementioned. As alluded to previously, he is second only to Tendulkar in the number of Test centuries scored, and also holds the lowest number of innings per half century ratio of the group (2.62 innings per half century, with Tendulkar second at 2.66).

Initially, I believed it to be a reflection of Kallis' batting style. Cricket is, after all, an entertainment business. To the purist, Kallis' slightly cumbersome style and often laboured footwork is not hugely adhering, and his solid but unspectacular technique somehow fails to set the pulse racing in comparison to the sublime majesty of Tendulkar, that West Indian flamboyance of Lara, the poise of Dravid and the tenacity of Ponting.

History has a tendency to be kind to pioneers and entertainers, and Jacques, unfortunately, fails to qualify as either. When assessing the greatness of a batsman, however, surely style alone cannot condemn a man whose record stands up to those of his seemingly more illustrious contemporaries. There had to be something deeper and far more significant as to why this magnificent run machine wasn't receiving his dues.

When racking my brains for any possible explanation as to what makes these batsmen so great, I began trawling through the stand-out innings that each have played - whether that be an innings that alters the outcome of a series, an innings that takes their side from a seemingly unwinnable position and puts them into a winnable one, or an innings that simply sets a new precedent against a certain attack.

If we cast our memory back to the Sydney Cricket Ground in January of 2006, the above point becomes particularly relevant. The two greatest batsmen on display in this game, Kallis and Ponting, both had significant success. Kallis scored 111 in the first innings, followed up by 50 not out in the second. Ponting, on the other hand, made 120 in the first innings, and a match winning 143 not out in the second. Statistically, you couldn't argue with either performance. The manner in which the runs were compiled however, presents a different outlook in its entirety.

During that first innings, it was eminently clear that Jacques Kallis and South Africa were desperate for a big first innings total, betrayed by their snail-like run-rate of less than three runs per over. Conversely, Ponting came out and made his 120 from 174 balls, a brisk enough strike rate for sure. This is of far less consequence to this debate than the second innings, however.

After taking a first innings lead of 92 runs, South Africa's batsmen were required to really push on in order to declare and set Australia an imposing total whilst giving themselves enough time to take the ten wickets needed for victory. Herschelle Gibbs went about this task in the right manner, making 67 from 74 balls before falling, though his partner Kallis looked far more concerned with playing for his average in crawling along at barely a strike rate of 50 once again. Upon setting Australia a difficult 287 in 76 overs, Ricky Ponting strode to the crease and blitzed 143 from just 159 balls to lead Australia to an unlikely victory.

That Test match, to my mind, is a prime example of why Ricky Ponting will always be rated as a greater batsman than Jacques Kallis, despite many of the statistics proving otherwise. It is also potentially the key reason as to why Kallis is rarely regarded in the same league as the other extraordinary batsmen I have mentioned throughout this piece to many cricket buffs. In short, Kallis may have spent far too many years of his career being a great accumulator of runs, as opposed to a match winner. Though there have been signs of late that Jacques has attempted to reverse this trend, he may just have left it too late in the day. This, along with the lack of that one career defining innings to date, might just explain why such a magnificent batsman may be placed on a slightly lower pedestal than his esteemed contemporaries, despite having a record that stands shoulder to shoulder with the best of them.
Posted by Andy Bloxham at 10:40