Fitness First? Not For India...

As I sit down to write this piece, India are in the process of being bowled out for 161 by Australia at Perth. A spicy pitch with pace and bounce, but not the minefield that this distinguished Indian batting line-up would have had you believe. David Warner brutally dismantling an ailing Indian attack on his way to the fourth fastest Test century was clear testament to that. 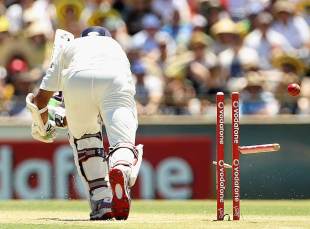 Test cricket hasn't been the happiest of hunting grounds for India across the last twelve months. When playing at home and on top, there are few batsmen that grind their opponents in to the dirt so attritionally. Stack the odds against them away from home, however, and the most startling of transformations takes place all too often. Two away series - England and Australia - have seen more collapses than the average household ironing board, but the root of this problem appears to extend far beyond batting alone. Wayward bowling, even from proven world class individuals such as Zaheer Khan, has been backed up by a worrying lack of energy and enthusiasm in the field whenever the opposition has been in the ascendency, a rather frequent occurrence in the aforementioned series.
A recent comment made by Australian wicket-keeper Brad Haddin summed up India's plight perfectly: "we spoke about a bit of that when we were batting. The longer we could keep them out on the field the bigger chance we had of breaking them. We know this side can be as fragile as any team in the world if things aren't going their way and they can turn on each other and the media turns on them pretty quick. We knew if we could keep them out there and put the numbers like we did on the board we knew we'd get the rewards because they break quicker than anyone in the world."

Such showings initially led me to question the mental strength of the Indian players after numerous abject performances in the face of adversity, but maybe that is a little unfair. Of course, technique is another issue for batsmen that are unused to foreign conditions, but when you consider that this is the much vaunted line-up of Sehwag, Gambhir, Dravid, Tendulkar and Laxman, arguably boasting the finest middle order that the world has ever seen, that surely cannot be the key factor, either. But what of culture? Could it be that the seemingly endless production line of talented cricketers coming out of India has led to many being brought up on the notion that cricket is about batting and bowling, and thus a neglect of basic fitness and conditioning? It is likely only because of such a wealth of talent that previous Indian sides have been able to 'get away' with this lax attitude in past years, but with the game now moving in to the professional era, and their rivals taking fitness more seriously than ever before, India have found themselves left behind.

As alluded to previously, it is a sometimes unfortunate trait of the Indian sides that their fielding lacks energy and, on occasion, effort. Let's take the current India team as an example. An ageing group they may be, but if we compare Indian players of similar age to their Australian counterparts, there is little contest. Ricky Ponting, 37, moves with far greater vigour in the field than Sachin Tendulkar, 38, while VVS Laxman, 37, is the proverbial tortoise to the hare in comparison with Mike Hussey, 36. Fitness, it seems, is sadly lacking in the current Indian side, and may well be the crux of their problems.

Perhaps tellingly, a recent ESPN Cricinfo appraisal of the current Indian side suggested that you would only want six of that team on the field when faced with the prospect of a toilsome day. That six comprised of MS Dhoni, Virat Kohli, Gautam Gambhir, Virender Sehwag, Ishant Sharma and Sachin Tendulkar, and of those perhaps only Dhoni and Kohli are of the fitness levels that would be deemed of a high enough standard for an international cricketer.

Any top sports psychologist will tell you that physical fitness is directly related to mental fitness. If you aren't physically fit, you cannot be in the best possible mindset to perform to the best of your abilities. During Michael Clarke's monumental 329 not out in the second Test at Sydney he and Michael Hussey were still running hard two's and three's late in the evening session after batting throughout the day. Had the roles been reversed, and Virender Sehwag had been batting, could we have expected the same? Batting is mentally very taxing, and if the body isn't in the right condition to spend hours doing so it greatly enhances the likelihood of a lapse in concentration.

There is, nevertheless, some hope for India. Their One Day International side has evolved in to an athletic outfit with the introduction of several fit and agile youngsters, namely Virat Kohli, Rohit Sharma, Ravindra Jadeja and Suresh Raina. Of these, only Kohli has cemented himself a place in the Test side to date, but with the inevitable changing of the guard in the next six to twelve months we can expect to see a far more sprightly Indian side. It hasn't happened yet, but contrary to the beliefs of many dispirited Indian fans, there is indeed a glimmer of light at the end of this particularly dark tunnel.
Posted by Andy Bloxham at 14:30