Is 'Sugar' Ray Robinson's #1 spot as secure as we once thought?

'Sugar' Ray Robinson is widely regarded as the single greatest fighter that the sport of boxing has ever seen. Boasting an astounding record of 173(108)-19-6 and generally being accepted as the most rounded fighter to have laced up the gloves, surely there is no debate as to his claim to that 'Greatest of All Time' tag with which he is so often labelled?

Reading one boxing forum recently, there was a debate revolving around Robinson and the so called 'Black Murderer's Row', made up of the likes of Charley Burley, Lloyd Marshall, Holman Williams and the Cocoa Kid, amongst others. Robinson, they suggested, gets a much easier ride with regard to managing to avoid facing any of the aforementioned fighters in comparison to some white champions of the time, namely Tony Zale and Freddie Cochrane. 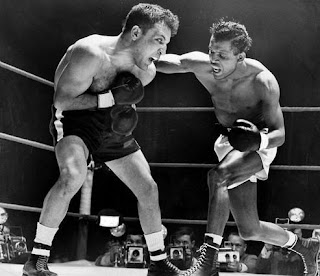 The story of the Black Murderer's Row is one for another day, but the purpose of this article is to discuss which, if any, of that group of fighters Robinson may have avoided facing. Whilst I realise it is nothing short of sacrilege amongst most boxing fans to even question Robinson's record, there are a couple of points that I feel should be made.
Due to the entry of the United States of America into the Second World War, Ray Robinson had to wait from 1941 (when he was first ranked as the #1 welterweight contender) until 1946 before he got his shot at that particular title. As such, the likes of Holman Williams and the Cocoa Kid had arguably faded from the scene by this point in time. Robinson gets a pass as far as those two are concerned.

Before suggesting that Robinson was too small for these guys, it should be remembered that he regularly made forays up into the middleweight category in order to participate in non-title bouts, even at this stage of his career. Fights with Burley and Williams (prior to his fading away) could therefore have been made during the war years without too much of an issue where weight was concerned. When putting this in context, Robinson again gets a pass for these fights not taking place. Although there was scope for these fights to have happened, all three of Robinson, Burley and Williams were regarded as the top contenders in their respective divisions, and desperately awaited the titles to become active again (the titles had been 'frozen' upon the USA's entry into the war). As such, there was no great incentive for Burley or Williams to come down in weight to secure a fight with Robinson, and likewise there was little chance of Robinson jeopardising his ranking by moving up in weight to fight either of the two. Around 1943 fights between this trio would no doubt have been fascinating, but owing to the aforementioned scenario the necessity for such fights was somewhat lessened.

Charley Burley however, is one of that group of fighters that Robinson probably could and should have fought once he had won his title in 1946. Of all of the members of the Black Murderer's Row, Burley was the most akin to Robinson in terms of ability. Burley is often described within boxing circles as 'the greatest fighter to never win a world title', and unlike the pass given to Robinson above, Burley was still very much a valid opponent at the time of Robinson winning his first world title.

Those arguing in defence of Robinson will suggest that Burley was still in contention for the middleweight title around the end of the Second World War, and as such was looking more toward a fight with Tony Zale than Ray Robinson. As history tells us, Zale duly avoided such a fight and went on to fight out a trilogy with Rocky Graziano. There is sufficient evidence to suggest that Burley did indeed offer a fight to Robinson, at any weight between 147lbs and 160lbs, even if it meant a non-title affair, around this time. On the back of this, Robinson gets no such pass, and his apparent avoidance of Charley Burley has to go down as an asterisk against Robinson's otherwise stellar career.

This article is by no means an attempt to diminish the achievements of the legendary 'Sugar' Ray Robinson, nor is it suggesting that he isn't indeed the greatest fighter that ever lived. The purpose, and hopefully the effect it has, was to alter the way that it has become all too easy to place Robinson as our #1 without question, and that even the great man should be subjected to the same scrutiny that a whole host of other great fighters careers are subjected to.

Is Robinson still the greatest? In my eyes, yes, however there may be one or two shortening the gap between Ray and the likes of Harry Greb, Henry Armstrong and Ezzard Charles after taking the above in to account.
Posted by Andy Bloxham at 14:30