Just how good was Larry Holmes?

"If you want to get technical about it, Rocky Marciano couldn't carry my jockstrap" - Larry Holmes. 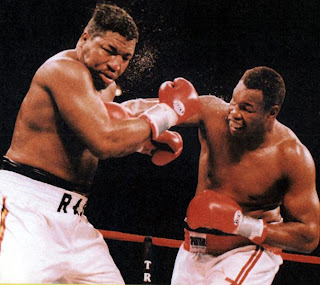 Despite Larry Holmes' mouth often dividing opinion on The Easton Assassin, there can be little doubt that he was a terrific heavyweight, possibly ranking amongst the top five best the sport of boxing has ever seen, depending on who you ask.

Timing, particularly in boxing, is everything - an adage that is applicable to the career of Holmes more so than many others. Herein lies the problem with Holmes, that he was the dominant force in the heavyweight division between the glorious reign of Muhammad Ali and 'Iron' Mike Tyson's tyrannical and revolutionary tenure, the two most revered heavyweights since Jack Dempsey trail blazed his way through the 1920's.

This, I feel, has proved somewhat of a double edged sword when assessing the career of Holmes. On one hand, Holmes' utter dominance allows boxing pundits and fans alike to wax lyrical about his abilities, despite Larry insisting that he didn't receive enough credit for his talents during his reign, a feeling demonstrated so well by the overtly bitter comment at the beginning of this article. On the other hand, it does make one wonder whether the esteem in which Holmes is held is purely an issue of people attempting to over-compensate for this perceived lack of credit, as opposed to a true reflection of his merits.

Holmes had many of the attributes required to make a great heavyweight. His piston-like jab is seen as one of the best in heavyweight history, he had a solid right cross, the heart of a lion and powers of recovery that X-men's Wolverine would envy, as demonstrated so ably when rising from the canvas against fearsome punchers in the mould of Earnie Shavers.

After lifting the WBC heavyweight championship of the world in 1978 over fifteen action packed rounds with Ken Norton, Holmes went on to defend his title sixteen times, a testament to his longevity at the highest level. Notable wins across the period came in the form of a stoppage win over 'The Great White Hope' Gerry Cooney in what was a highly publicised bout, a stoppage win over the aforementioned Shavers after peeling himself off the canvas, and a contentious split-decision victory over future champion 'Terrible' Tim Witherspoon. When you add to this wins over other future, albeit not dominant champions in the form of Trever Berbick, 'Bonecrusher' Smith and Mike Weaver it highlights that Holmes by no means had a succession of 'gimme's'.

In 1983, Holmes relinquished his WBC belt in favour of recognition by the newly-formed IBF, and went on to make a further three defences of this belt before suffering his first loss to career light-heavyweight Michael Spinks in 1985, in what was voted Ring Magazine upset of the year. The decision was tight, though Spinks went on to repeat the feat in a rematch, this time gaining a split-decision win. Nevertheless, Holmes had amassed a total of nineteen defences of his crown, an outstanding achievement in any era.

When you begin to look more meticulously at Holmes' record, holes do however begin to appear. Of course, this is the case with the majority of fighters throughout the course of boxing history, but it does seem there are a fair few question marks over Larry's reign.

One benchmark for assessing a fighters career is to analyse their best win. In Holmes' case, I think it is fair to suggest that this would be Ken Norton. Norton was of course a very fine heavyweight in his own right, though it is difficult to look beyond the fact that Ken was 33 years of age by the time he and Holmes met, and arguably past his best. To add to that, Norton had also already been splattered across the windscreen of the juggernaut that was the young George Foreman in two brutal rounds, before going on to fare even worse in a first round knock-out loss to Earnie Shavers. Granted, these were two fighters that could punch holes in a set of blast doors, but the upshot being that Norton showed little after that Holmes fight to suggest he was still a prime fighter. This may be slightly unfair to Ken, but he is arguably best known for those two losses alongside having being the great Muhammad Ali's 'bogey man'. In short, despite being a fine fighter, Norton's shortcomings at the very highest level make this rank in the 'good' as opposed to 'great' wins category for Holmes.

Outside of the Norton victories, the likes of Shavers, Witherspoon, Smith, Weaver and Berbick did indeed go on to win a version of the heavyweight title after being beaten by Holmes. It is of course impressive to have such a collection of future champions in your win column, but Vitali Klitschko, Shannon Briggs, Evander Holyfield and Frank Bruno did the same after losing to Lennox Lewis - a yardstick which I seldom see applied when assessing the career of Lewis.

So where, once all of the above is taken into account, does this leave Holmes? Is he actually worthy of a place in the highest echelon of heavyweight history? There is no doubt that Holmes was a tremendous fighter, a fine champion and one of the more gifted heavyweights we have seen, but I'm not so sure that he belongs alongside the Muhammad Ali's and Joe Louis' of this world. Even when matching Larry against other top heavyweights, does anyone really see a man whose lapses in concentration against Earnie Shavers and Renaldo Snipes saw him tasting the canvas doing the same against a George Foreman and surviving? For me, Larry is ranked slightly too generously by many, and I'd place him toward the bottom end of my own top ten heavyweight rankings upon reflection, as opposed to the top half as I may have done previously.

As ever, your thoughts are welcome. Maybe I'm being slightly too harsh when assessing Larry's career, but it is food for thought nevertheless.
Posted by Andy Bloxham at 23:38