This Saturday inside Sheffield's Ponds Forge International Arena 'The Special One' Kell Brook (25-0-0) showcased his vast array of talents with a stoppage victory against the tough, game but ultimately over matched Rafal Jackiewicz (38-10-1) of Poland, whilst serving up a timely reminder to the welterweight division that he means business, and is coming looking for titles. 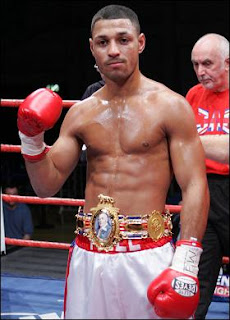 From the very first bell Brook took the centre of the ring in this WBA title eliminator, looking in tremendous shape and finding his range with a series of sharp, powerful jabs. Jackiewicz, for the most part of the opener, looked to keep a high guard and stay out of range of Brook's right hand, possibly with a view to countering, but by the end of the round was already beginning to look befuddled as to how to deal with the speed and movement of Brook. This was highlighted by a sharp counter landed by Brook when Jackiewicz opened up slightly in the dying moments. A fairly uneventful opening round, but one in which Brook looked wholly at ease.

Clearly encouraged by what he had seen from Jackiewicz in the first, Brook began the second round looking increasingly confident, and scoring with the left right combination almost at will. This pattern followed through in to the third round, with Jackiewicz looking all at sea against the movement, reflexes and accurate punching of Brook, his growing confidence outlined by an uppercut thrown with vicious intent that, luckily for Jackiewicz, glanced off his temple on it's way through.

By now Brook's Polish opponent was looking beleaguered, and with visible damage beneath both eyes was cutting a rather forlorn figure in his corner at the climax of the third round. Racing from his corner at the bell for the fourth, Brook went to work in a relentless fashion, balancing aggression perfectly with a tight defence and more than impressive reflexes. Jackiewicz still remained solid however, despite a crunching body shot from Brook early in the round. It appeared that Brook would have to break his opponent down a good deal more before the stoppage he craved as a statement of intent was in sight. Jackiewicz, remember, had never been stopped in his previous 48 fights. Late in the round Brook unloaded a volley of punches, not all of which landed, but which again highlighted the fact that his opponent had no means of slipping, blocking or countering the shots.

Judging by the lack of meaningful work coming back from Jackiewicz, it seemed clear to all that he was content to last the distance, and his body language between rounds betrayed his inner thoughts that told him he wasn't going to win on this night.

Round five saw Brook unveil his full arsenal, throwing a succession of uppercuts with one visibly staggering Jackiewicz, though his legs still looked strong. Throughout the onslaught, Brook stuck to his basics, and was still having regular success with that sharp jab, further marking up the eyes of his opponent. The packed crowd inside the Ponds Forge Arena were on their feet by now, smelling blood and sensing the first stoppage loss of Jackiewicz's career.

As the sixth got under way Brook still seemed intent on working the body, perhaps forming the opinion in his own mind that he would need to break Jackiewicz down sufficiently by the later rounds in order to force the stoppage. Midway through the round however Brook connected with a strong right hand, and after eating another left right combination the referee Howard Foster, who had been taking a close look at the Pole since the previous round, decided he had seen enough and stepped in to end the bout.

It is true that Jackiewicz looked tired and was becoming increasingly ineffective at defending himself against the sharp attacks of Brook, but the question as to why an eliminator for a world title no less can be stopped on a small number of unanswered punches is one that must be asked. Let's ask ourselves, if it had been the other way round with Brook struggling, would the referee have stepped in? No, is the answer to that particular question.

Lest we forget this is a man that had yet to be stopped in 48 previous contests. Only once in the fight had Jackiewicz been visibly hurt, and it does make one wonder if British boxing is beginning to become slightly unfair toward foreigners that are in with a British prospect, this being the latest in a string of questionable refereeing decisions.

It is the nature of the sport of boxing that the balance of a fight can be swung dramatically with one punch, and despite tiring Jackiewicz undoubtedly still had that chance, albeit a very slim one. He certainly wasn't out on his feet or defenceless, though his lack of activity in terms of what was being thrown back was probably the decisive factor that told Howard Foster he had seen enough. In this authors mind it was a premature stoppage, all things considered.

That is to take nothing away from the performance of Kell Brook, however, who showed a level of maturity that some detractors may have questioned him having before this fight. It was perhaps this aspect of his performance that stood out and showed those watching that he is indeed the real deal, and is more than ready for a tilt at some of the welterweight divisions bigger names.

Brook was boxing with an air of confidence, patience and guile in the way that he set up and executed his attacks. Many a fighter of similar experience to Brook would have gone actively seeking the stoppage win once he saw that his opponent was offering little in terms of return fire and was clearly inferior, but Brook kept to the basics behind his effective jab and systematically broke down Jackiewicz. Rather than getting overly zealous and smothering his own work, as is so often that case with young fighters that have an opponent in trouble, Brook managed distance with aplomb and continued to land crisp, clean shots.

What next then for Kell Brook? His promoter Eddie Hearn suggested during the post fight interviews that a fight with former WBC champion Andre Berto could be on the cards, with the possibility of this match-up already having been discussed with Berto's promoter Lou DiBella. This would be a definite step up in class for Brook and would promise to be an explosive fight that could really provide a platform from which 'The Special One' could gain Stateside recognition.

Other possibilities include America's Mike Jones, or an all British showdown with Amir 'King' Khan once he makes his move north to welterweight following his scheduled bout with Lamont Peterson. This one would certainly capture the imagination of the British public, and would almost certainly garner some interest in the States given Khan's recent outings across the pond.

For now, however, Brook says that he will continue to knock out whoever Hearn puts in front of him, and based on Saturday's performance, who would bet against him?
Posted by Andy Bloxham at 23:04